It seems as though 22 For ’22: Visions for a Feminist Future, hosted by Gucci’s CHIME FOR CHANGE and The Meteor, could not have arrived at a better time. As news broke that the Supreme Court is inching closer to overturning Roe v Wade—the 1973 case that protected the right to an abortion without government interference—Gucci and The Meteor brought together some of today’s most impactful feminist voices for a summit at Barnard College. With speakers including Tarana Burke, Janicza Bravo, Paola Ramos, Busy Philipps, Amandla Stenberg, Dolores Huerta, and host Symone D. Sanders, the event chronicled how women are fighting every day for control of their stories, their bodies, and the right to live how they see fit.

It was an evening that left me questioning how I can make more of an impact moving the needle on climate change, reproductive rights, and other pertinent issues we’re all facing. But what I truly appreciated is that each of these women uses their power to enact change in the best way they can—they’re not trying to do it all (because that’s impossible), but they’ve made enormous contributions in their chosen lanes that have helped women and nonbinary people. Below is a recap of some of the most powerful quotes from the stage.

The landmark 1973 Supreme Court ruling over Roe v Wade is currently hanging in the balance. In anticipation of the official court ruling next month, which could likely see its overturn, several states, including Texas and Oklahoma, are already taking initiative to restrict abortion access. Many other states will undoubtedly make plans to follow suit. But as we know, abortion bans will never actually stop abortions from happening. It will only make it more difficult for women, especially those with limited means, to access them. Crossing state lines can become a major expense, and “back-alley” abortions can literally cost women their lives. Ultimately, Avila-Guillen in conversation with actress and activist Busy Philipps rallied for all pro-choice supporters to be active and show their support in tangible ways whether that’s protesting or donating funds. 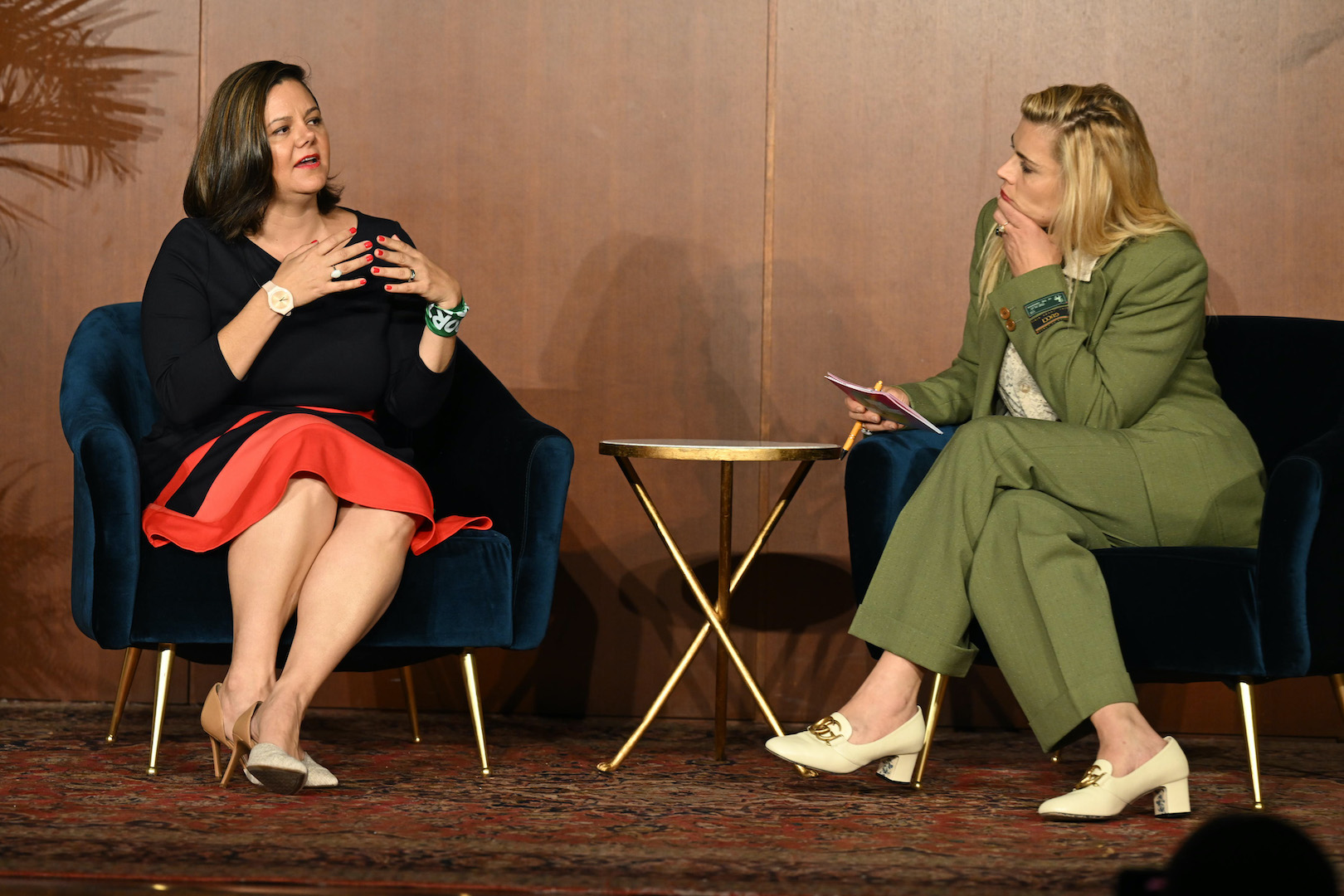 “I know what people are saying when they say the Me Too movement was co-opted. But it’s because they define it by what they see in the media. And what I’m trying to push people to do is understand that what you see, what has been co-opted is what the media has created. And that is not the movement. And so that’s the reason why I keep pushing y’all. If you keep defining the Me Too movement by what NBC, CNN, blah, blah, blah, what they tell you it is, then we won’t ever get anywhere. That is not a movement. The movement is what we are doing, what the folks who are on the ground every day are doing. Our movement hasn’t been co-opted because I know there’s people doing this work diligently every day for survivors, not for the salacious headlines.”

In conversation with writer and director Janicza Bravo, Me Too movement founder Tarana Burke clearly defined that owning her story and helping survivors is really what the Me Too movement is about. It’s not about all the headlines we’ve seen and the narrative about white actresses stealing the spotlight from Burke, as the media would like us to believe. We can’t forget the real mission of the Me Too movement: to help women who have been abused own their stories and carry on, despite the difficulties and trauma they’ve been faced with. 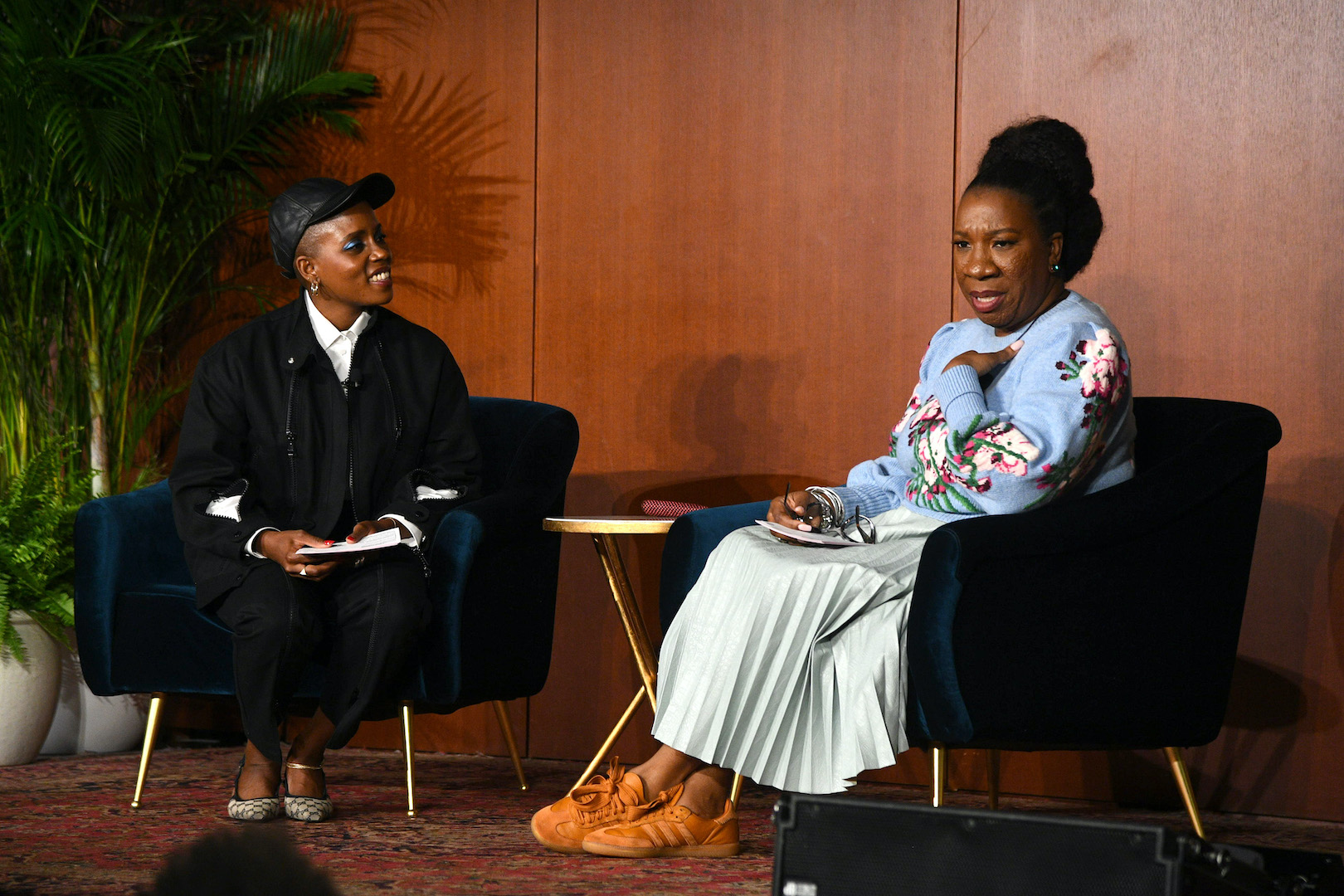 “I want them to help stop the war in Ukraine, to stop the deaths. If we treat each other with love and respect, we would never have wars. When we live in a civilized world, we always have other ways of solving problems. War is death, suffering, and a huge sorrow for everyone.”

The feelings of despair were loud and clear from the Ukrainian refugee who shared her story of escaping the war-torn country with her two children. She knew it was time to leave when she was unable to get medication for her disabled son. Even when she was living in an area that was not occupied by Russian forces, there were limited supplies and no access to produce or medications. She is now living safely in the United States but left behind other family and friends who have little access to water or food and feel helpless. 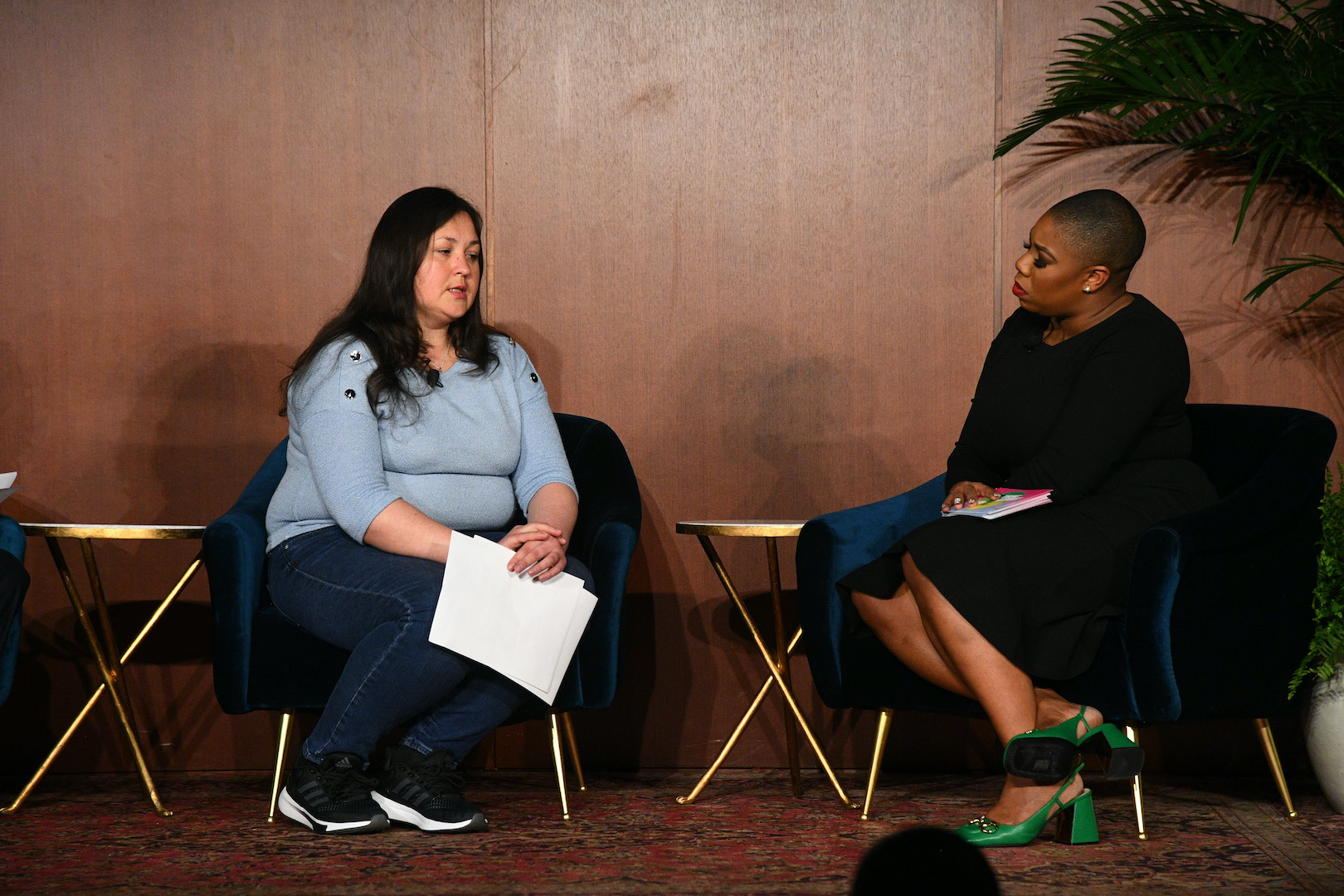 “When I entered this space in New York, I looked around me, and I was one of the only people that looked like me, if not the only person. And I say this because the climate crisis is not passive. The climate crisis is not the result of natural disasters, it’s actually man-made. And it’s not just man-made, it’s white man-made. It is the result of capitalism, years of colonialism, years of racial oppression. So, if you want to get involved, the way we save our planet is when we protect the most vulnerable communities among us, this includes Black trans women, this includes Indigenous peoples, children, and young folks. When we protect them, we protect everybody else.”

The call to action on climate change is more urgent than ever as activists continue to raise awareness on the actions of companies on various fronts. As Ayisha reinforced on stage, the real culprit behind climate change is not plastic straws but corporate greed and oppression and these factors are often overlooked. It can feel overwhelming and hard to know where to really make an impact when it comes to climate change but she made it clear that prioritizing at-risk communities is the path forward. 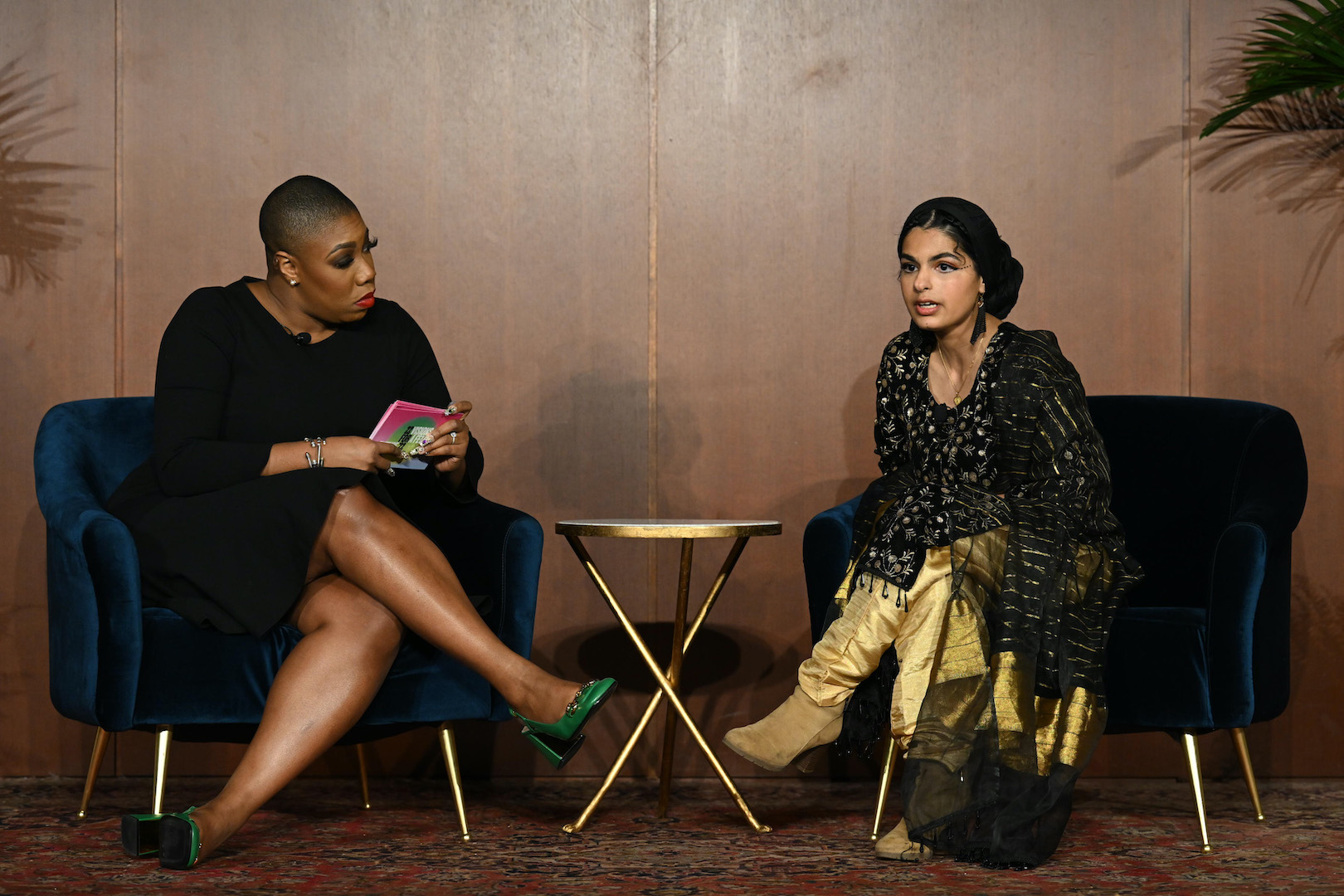 Fatema Hosseini, Journalist and Master’s Student of Investigative Journalism at the University of Maryland

The Afghan journalist, who escaped her country when Kabul fell to the Taliban, highlighted the disparity in coverage between what is happening in Afghanistan versus Ukraine. Now that the world is focused on conflict elsewhere, the Taliban has stepped up its efforts to take control of the Afghan people. And, especially as a journalist, Afghanistan is not a safe place, especially when they’re female. Hosseini shared the path to her “risky” career and how she even had to hide it from her family because it meant having a target on her back, and even putting her family in danger. 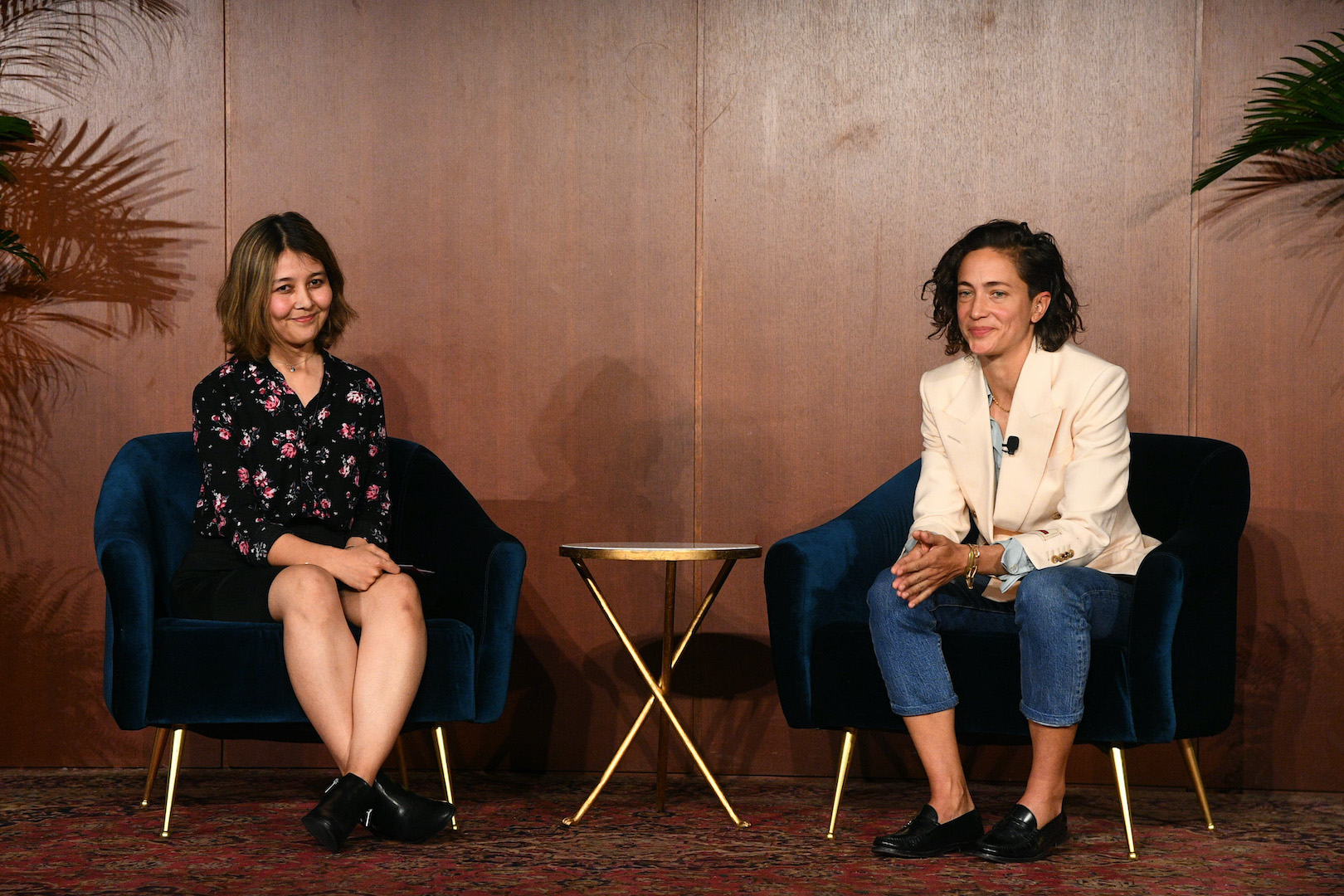 “Labor unions are a foundation of our democracy.”

The mention of labor unions is omnipresent in the headlines as of late The labor icon and founder of the National Farmworkers Association joined the stage with labor organizer Chris Smalls, who has recently been thrust into the spotlight. The two engaged in conversation about how important workers’ rights are, and Huerta even bestowed words of wisdom for Smalls regarding taking care of his mental health as he waits to hit the negotiation table with his billion-dollar employer. 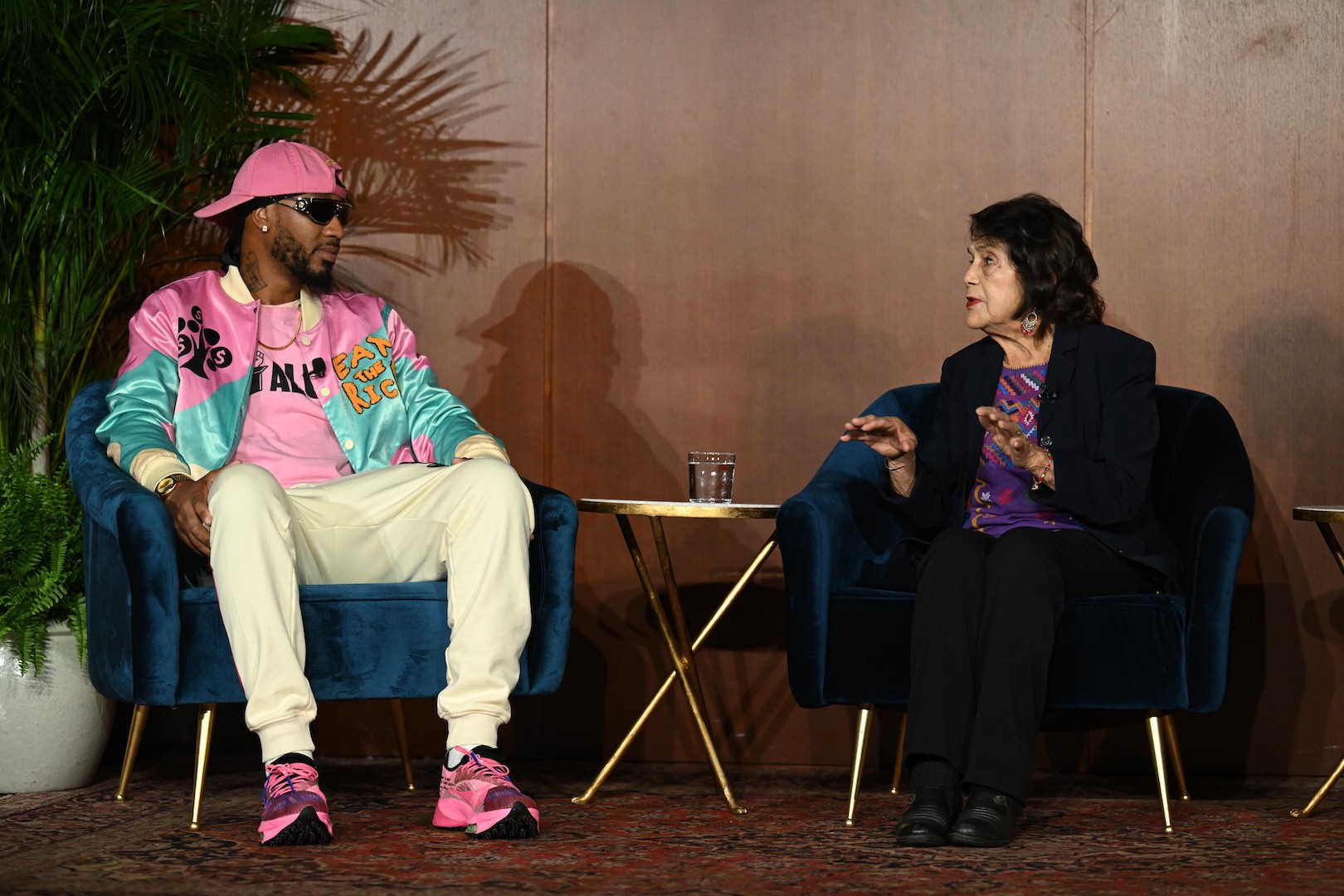 “Folks often think we are some satellites just floating in the distance, and we’re hypothetical. So they don’t actually interact with us on a real tangible level. They don’t consider that, as a Black trans woman, I have a family. I have a momma who calls and checks on me and wants to make sure I’m safe. I have homegirls and homeboys and home-folks who are always engaged with my life, and I’m engaged with theirs. I have niblings (nieces and nephews, that’s the gender neutral term I use for them). I think that’s one of the misconceptions, and I think the other piece is that, yes we’re brilliant, amazing, fabulous folks. But this gender stuff is something we’re all holding—and so, yes, you may think in a lot of ways that being trans or being non-binary is so sparkly and magically different (and in some ways, it is because you know we know how to work a room), but everyone is dealing with some gender expectations that they probably fall short of meeting. And that’s what I want other folks to understand.” – Raquel

“It’s interesting, the first time I came out as non-binary was when I was a teenager. It’s funny, when you’re a teenager, you kinda just know who you are. And I realize as I get older, I’m actually returning back to the identities and pieces of self that I knew most definitely when I was a teenager. It’s definitely strange now in the media, dealing with pronouns. In my immediate community, which is all gays, has just innately used they/them pronouns for me. But I’ve been afraid or timid to figure out how to use that in a professional environment—or what are the moments in which I talk to my boss or the people I work with on set about it. I think what people sometimes don’t understand is that it’s kind of a series of trying to figure out how to make yourself comfortable, or center your own comfort, but then sometimes trying to put yourself in a position of discomfort. But I feel grateful for how normalized this conversation has become”  – Amandla

Amandla and Raquel are two prominent forces within the LGTBQ+ community.  They both acknowledge what an exciting time it’s been with more trans and nonbinary people in the forefront and more language around gender. But at the same time, there is an all-out attack on the rights of the LGBTQ+ community with legislation such as Florida’s “Don’t Say Gay” bill that recently passed, Alabama criminalizing medical care for trans youth, and Texas outlawing gender-affirming care for teens. Ultimately, it’s important to find your community and support system. But for those who want to get involved and help the community, Willis asks supporters to amplify the work that already exists. 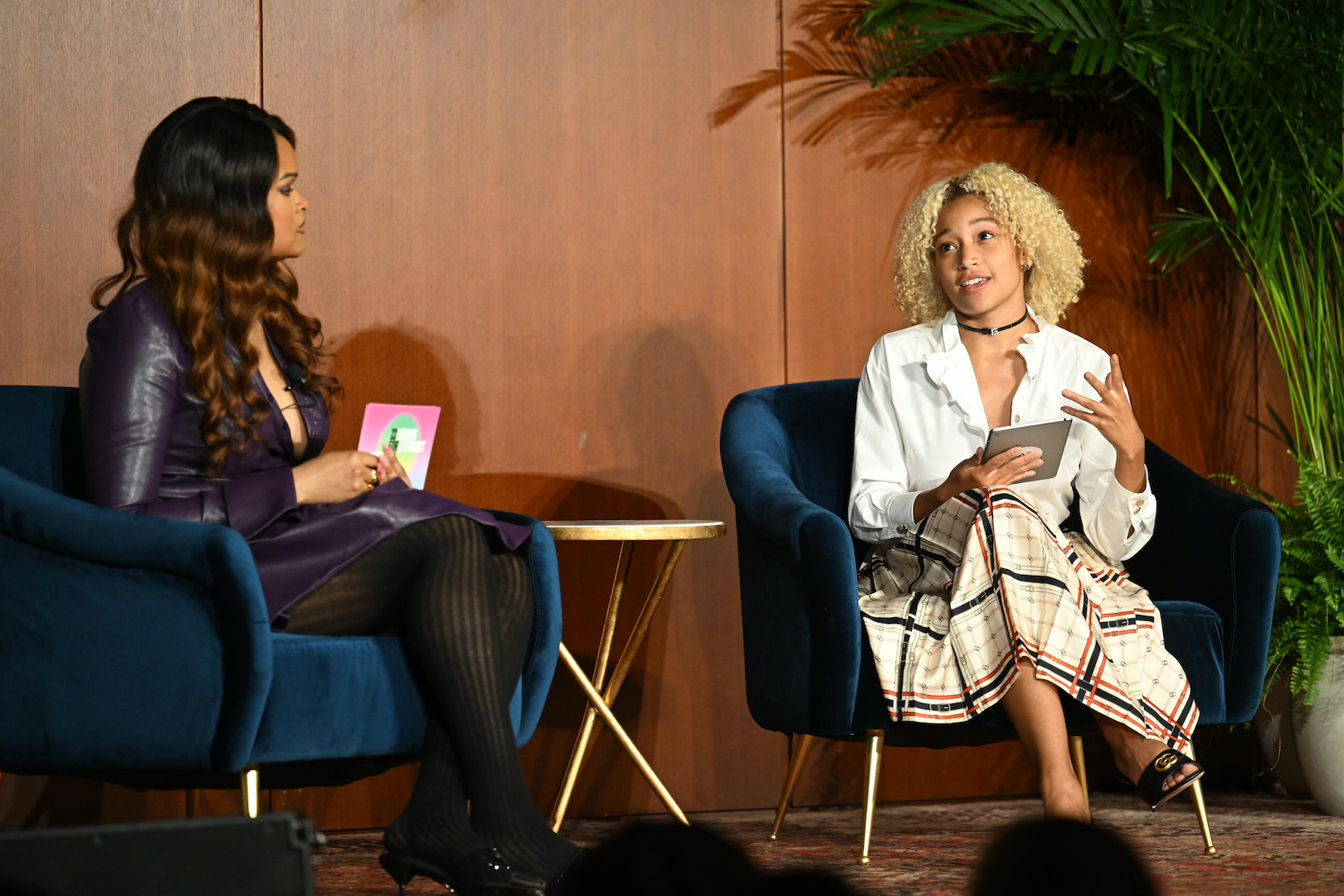 Raquel Willis and Amandla Stenberg
Explore other topics
Related stories
previous slide
01 / 03
next slide
Close
People
What we stand for and how we act towards one another is at the very core of who we are.

Discover how Gucci is generating positive change for People.
CHIME FOR CHANGE
CHIME FOR CHANGE is a global campaign founded by Gucci in 2013 to convene, unite and strengthen the voices speaking out for gender equality.
Planet
We look at the world around us in a holistic way and believe that it is our duty to be sustainable, responsible and accountable in everything we do.

Discover how Gucci is generating positive change for the Planet.